Last weekend, Gary Vaynerchuk (CEO of Vaynermedia – an 800 employee, $150mm agency) did something he rarely does – he launched a $50 subscription box consumer product.

Within 36 hours, he had successfully pre-sold over $100,000 worth of monthly subscriptions (by my estimates), using nothing but his cell phone and a Google Form.

Here’s how he did it.

From Idea to Execution in 12 Minutes

Friday night, Gary Vaynerchuk (who is technically on vacation) was texting his team in a group chat about an idea he had to launch a GaryVee Wine Club.

The idea was simple – to launch a $50 per month subscription box wine club that blows every other wine club out of the water. The box itself would contain 2, 4, or 6 surprsie bottles of wine every month, hand-picked by Gary, with the idea being that purchasing that same wine at retail price would cost a consumer at least $100.

The goal was to launch to 5,000 “alpha testers” of the subscription box, with the first box shipping out in October, giving his team roughly 40 days to put it all together.

Gary was discussing all this with his team via text, and about 12 minutes into the brainstorm (according to him), he simply took a screenshot of the group chat and uploaded it to Snapchat, his Instagram Story, and Twitter, with a single call to action over the screenshot: “Who’s in? Email me [email protected]” 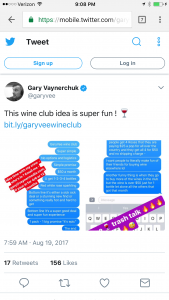 The response was enormous.

According to Gary, his inbox was absolutely blown up by people interested in signing up for the subscription box, and his assistant Tyler was buried in emails trying to keep up with responses.

From Validation to Minimum Viable Launch

The concept was clearly validated, so Gary had his team create a graphic for his social media accounts the next day, as well as a bare-bones Google Form to collect interested customers’ information.

The next morning (Saturday), he posted how excited he was about the massive response to his subscription box announcement. I’m sure he was very excited, but posting that also served the dual purpose of showing social proof behind his product launch. 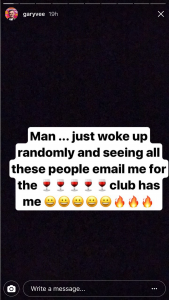 His next posts were “swipe up” calls to action to view the order form his team put together. 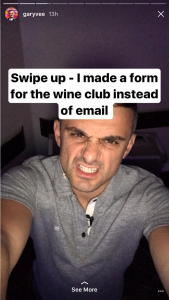 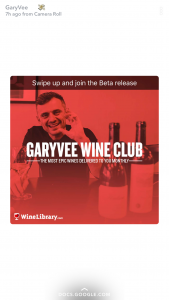 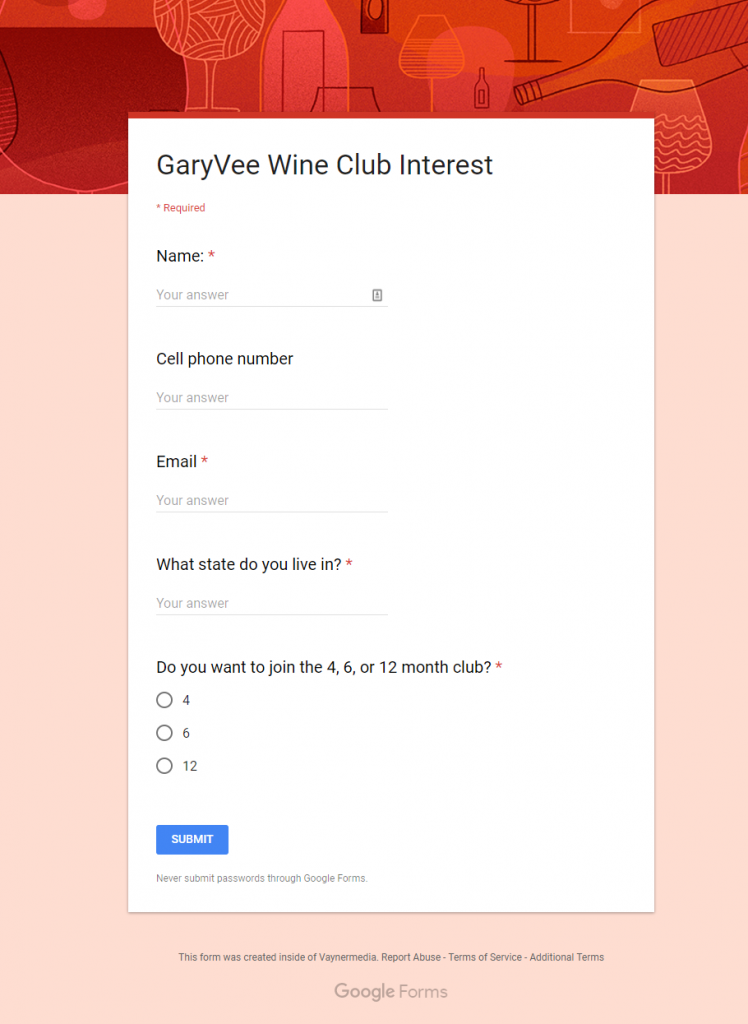 Throughout the rest of the day he continued posting videos and pictures, updating his audience on how the launch was going (and simultaneously spreading awareness of it). 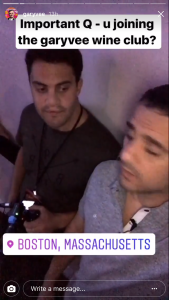 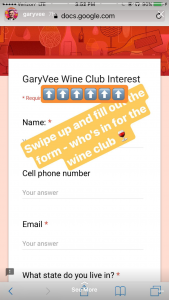 The cool thing about this Google Form is that because Gary used a bit.ly link on his Twitter posts, by adding a ‘+’ after his Google Form URL, we can see the click stats for the link, which clearly shows that in just the first 24 hours of this form going live, nearly 9,000 people have clicked on that link.

That’s 9,000 people from Twitter alone, not counting traffic from Snapchat, Instagram, or the people who emailed him the day before.

And the best aprt is – all of these clicks are from targeted people who are VERY likely to buy – Gary states the price upfront in his social media posts, and the only people who even knew about this deal at the time were those who followed him organically (I checked, and even the Wine Library website didn’t have an announcement about this wine club).

So, doing the math on that link, let’s say just 20% of those 9,000 order form visitors convert (which I think is a pretty conservative number given the context), and they sign up to pay $50/month…that’s 1,800 customers paying $90,000 per month for a minimum of 4 months, for a product that was announced less than 24 hours earlier.

Why Was This Launch So Successful?

It’s worth stating this upfront – I think the #1 reason this launch was so massively successful is because GaryVee is…GaryVee.

He has an organic following of millions, his followers tend to be some of the most engaged in the industry, and he very rarely pitches a B2C product, which means when he does people notice.

But besides having the “GaryVee” effect on this launch, I think what Gary did a masterful job of was letting his audience (comprised mostly of entrepreneurs, marketers, and wantrepreneurs) feel like they were let in on a “secret” and getting behind-the-scenes access to this product launch, by posting a screenshot of the conversation he was having with his team.

Gary could have just posted a video saying “Hey, I want to launch a wine club. Who wants to sign up and buy? Shoot me an email if you’re interested,” and it likely would have still been successful because it’s Gary, but by making this launch more of an over-the-shoulder experience, Gary’s social media following felt like they were actually active participants in the product launch, which massively increased interest, engagement, and ultimately (I suspect) conversions.

For me, this was incredibly interesting to watch because this is the definition of launching a minimum viable product. In my opinion, Gary is the absolute best in the world when it comes to capturing people’s attention on one platform, and then redirecting them to another platform, so when I saw this launch unfolding I sat up and took notice.

I think the main point we can take away from this is that when launching a new product (if there’s true demand for it) you can keep things incredibly MVP, and as long as you can turn the launch into an engaging experience for your target market (vs just another advertisement).

Over a single weekend, Gary launched a revenue stream that will bring in (assuming he launches to 5,000 people at $50/month) $250,000 per month, which is $3,000,000 per year. To be fair, the margins aren’t going to be great on this subscription box unless he’s able to biz dev his way into free/extremely cheap bottles in exchange for the exposure his box will bring the wine brands… but $3,000,000 per year isn’t anything to sneeze at.

And he launched this $3,000,000 revenue stream over a single weekend, using nothing but a few screenshots, his phone, and 3 social media channels.