Vendasta is a Canadian-based SaaS+Marketplace play that has been in the digital marketing vertical for over a decade. Originally starting out as a review and reputation management software, the company has since pivoted to capitalize on the rising number of independent digital marketing agencies to sell white-labelled products and services to agency owners (and other organizations that sell to small-to-medium businesses (SMBs).

How is it’s business model set up, and how has it managed to scale to over $2,000,000 in monthly recurring revenue?

According to the website, Vendasta has 19,000+ agency and media partners (it’s worth noting that Vendasta does have a free plan, in which the majority of these partners reside), with 35,000+ salespeople working under those partners, serving over 2 million local businesses.

Vendasta’s business model itself is a little confusing. The best way to summarize it is in the words of the CEO Brendan King – Vendasta is a white labelled product and services marketplace with a SaaS gate (paraphrased).

We’ll break down exactly how it works below.

What Problem Does Vendasta Solve?

Vendasta started out as a reputational management software selling primarily to marketing agencies and other firms that would then resell to local SMBs.

Vendasta had created an internal marketing and sales CRM / automation tool that it was using internally, and it began selling that tool to the agencies who were its customers.

So now, Vendasta had a suite of SaaS products it was selling to agencies. What they realized was that they had in effect built out a marketplace with an audience of paying resellers, and they could sell other products on that marketplace to their network of agencies and publishers as easily as they could sell their own products.

So Vendasta opened up its white-labelled marketplace, and expanded into white labelled services as well.

Vendasta solves two problems for its customers (the agencies and publishers who serve as resellers for Vendasta):

Let me explain that second point, because it’s a little confusing.

If you’re an agency owner / freelancer / consultant, and you go to work on a client project, there are most likely a number of tools that you recommend the client purchase to get the most results out of whatever it is you’re doing for them.

Traditionally, this has resulted in a dilemma – do you as the consultant pay for the tool, take the cost out of your retainer, and then essentially hold the tool hostage over the client (where if they stop paying you, they no longer get access to that tool)?

OR do you tell the client to buy the tool, which they often will, increasing the expense to the client but not increasing your revenue in any way?

With Vendasta’s white labelled solution, there’s no longer a dilemma.

You as the reseller would pay a flat white-labelling fee to Vendasta, and you can resell the software under your own brand to your client (the end user) either at cost or for any markup you want.

And the Vendasta platform takes care of payments, licensing, and all the other headaches that reselling software usually involves.

This is a massive value add and differentiator (“proprietary” SaaS tools) on behalf of the the agencies who subscribe to Vendasta.

How Does Vendasta Make Its Money?

Vendasta has what it calls First Order and Second Order revenue.

Any time a software license on the marketplace is purchased by a reseller, Vendasta receives a percentage cut off the top of that transaction (traditional marketplace model). This is known as Second Order Revenue.

As of June 2018, their First Order (subscription) revenue made up approximately 1/3rd of their $2.3mm per month revenue. The other 2/3rds of their revenue came from Second Order (marketplace commissions).

How Does Vendasta Acquire New Customers?

Due to the nature of Vendasta’s very different customer avatars (Entrepreneurs, Agencies, Enterprise), there is no single acquisition channel driving the majority of revenue or new customers that I could detect.

Rather than the single-channel, single-funnel approach that many bootstrapped direct-response driven companies follow, Vendasta is employing what I’d call a blended channel approach. 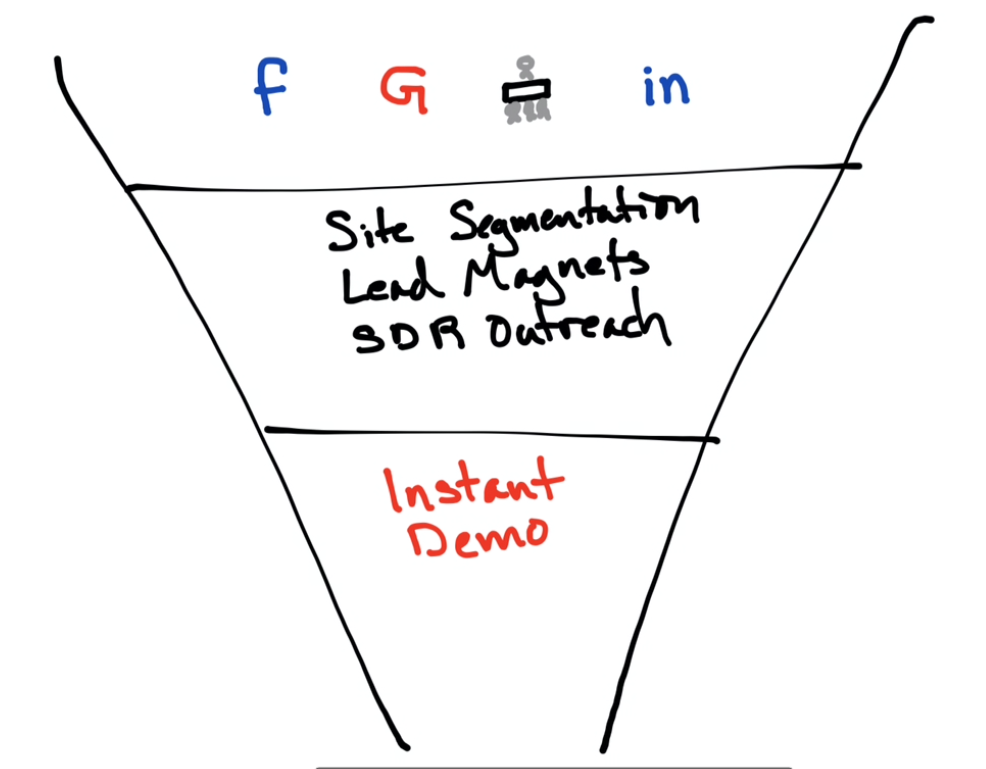 Vendasta is currently running Facebook Ads, and based on the messaging is targeting their “Entrepreneur” demographic and the smaller end of their “Agency” demographic. 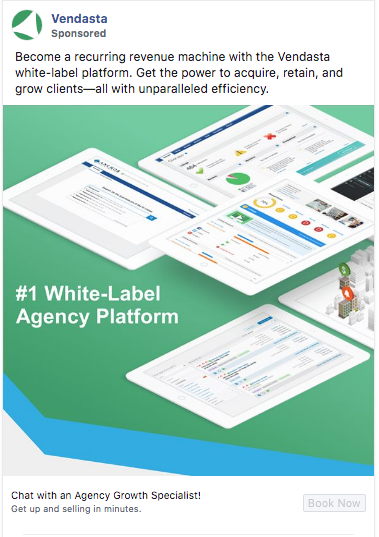 Vendasta is also running Adwords ads targeting the same Entrepreneur and Agency demographics, driving traffic to the homepage of their website. 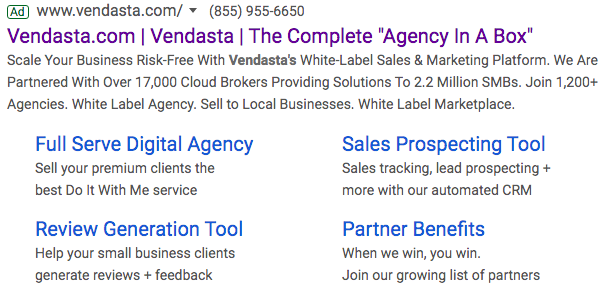 Vendasta leverages both physical and virtual (podcasts, webinars, etc) stages, which is a smart move given its target customer, and is an acquisition channel targeted at their agency and enterprise cohorts. I see massive room for growth in this channel – more on it below.

Within 48 hours of visiting the Vendasta site and poking around their funnels and marketing assets, I received this LinkedIn connect request.

Still not 100% sure how they mapped my LinkedIn profile to my on-site behavior (as far as I know I didn’t use any of my real emails when opting in to anything, though its possible I was cookied from a previous visit).

I reached back out to Ahmad asking him what took they’re using to map site visitors to LinkedIn profiles – will update this article when I get an answer.

Definitely an effective strategy, and something virtually no other SaaS or service operator in this space is doing.

(Update: Vendasta is using a combination of Cleverly – a LinkedIn lead gen agency, and DuxSoup).

Want access to ALL of Smile Virtual’s ads + the evergreen webinar + a detailed video analysis by Jordan of each step of their funnel? Join The Membership today for instant access.

This is where, in my opinion, Vendasta really shines and has improved massively over the last 12 months.

Well…yes. To all of the above.

This is confusing for a first-time visitor, and if there’s one universal law of marketing it’s that confused prospects don’t buy.

So Vendasta goes to great lengths to ensure it delivers the most relevant content to each visitor…and nothing else. You’ll see this theme repeated throughout the activation and conversion decisions Vendasta makes throughout their funnel.

Because Vendasta serves so many different cohorts of customers and end users, one of the first calls to action on the website homepage is an interactive, self-identifying segmentation question.

Depending on your input into this question (the “job” you want to accomplish, borrowing from the Jobs to be Done framework), this quiz will redirect you to the most relevant page on the site.

The rest of the homepage (and website) is designed to showcase features and results that the Vendasta platform has to offer.

The primary CTA of these landing pages (and, really, every page on the site) is to book a demo of the product.

Now initially, any time I see the need to book a Demo as the CTA for a relatively inexpensive SaaS product targeted at SMBs…I cringe.

In many (if not most) cases, hiding a “buy now” button behind a demo is an unnecessary barrier for many SMBs. In enterprise sales with a high degree of complexity and customization – I completely understand the need, but for SMBs the need is less important.

In the case of Vendasta, though, I think it’s exactly right. No matter how detailed their site is, due to the scope of their platform virtually every prospect is going to have a question, concern, or objection specific to their unique situation. The best way to address these objections is to handle them in a live demo or sales conversation.

Vendasta handles this beautifully with their “Instant Demo” solution. 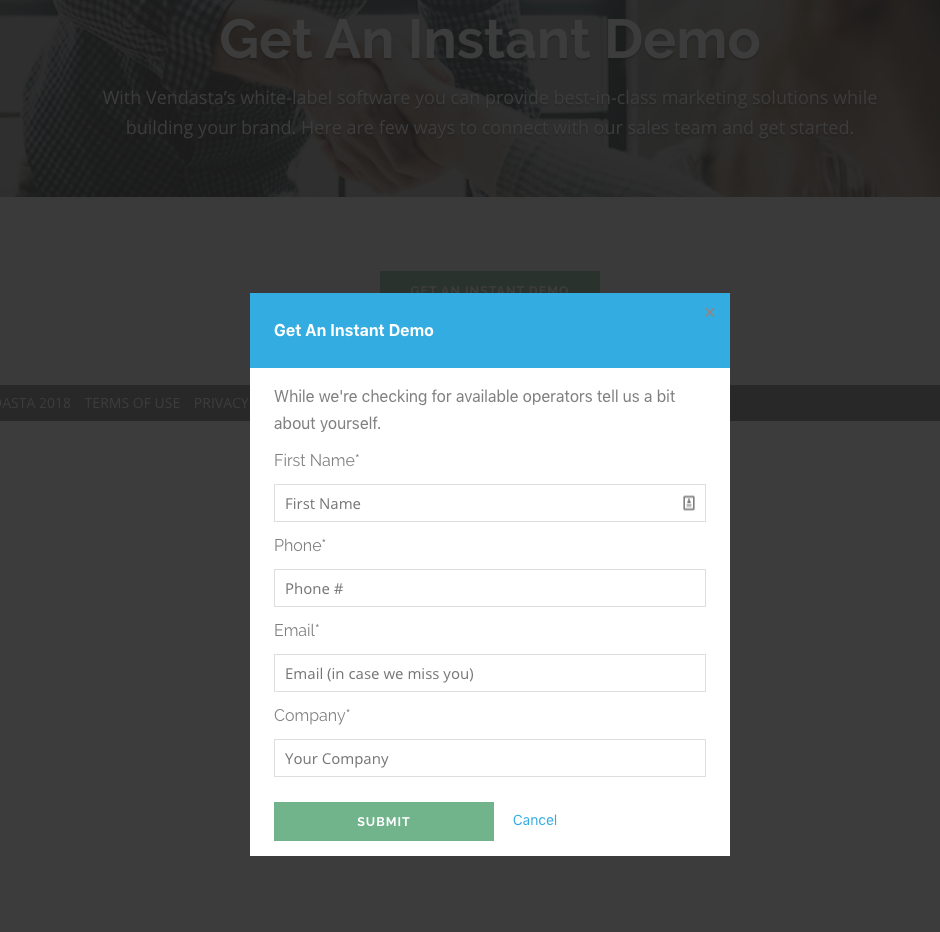 Using a SaaS tool called Crankwheel, Vendasta is able to qualify prospects and provide on-demand 1-on-1 screen share presentations to prospects…without requiring the download of any browser extension or third party software.

As a user, you have the capability to get a 1-on-1 demo in less than 5 minutes (or you can schedule a demo for a later time.

What Vendasta Is Doing Well

Vendasta is doing a great job at driving top of funnel awareness and using its website to quickly and efficiently segment users into their respective cohorts…and then only deliver the content that those cohorts would find valuable.

I think the Vendasta website’s ability to use their website to address specific use cases, challenges, and Jobs to be Done is one of the better examples of how to use a website to segment and qualify prospects.

This is something that many companies try to do, but ultimately fail at. This is due to the fact that most companies don’t really understand who each of their customer cohorts are, or what the problems of those cohorts are. Vendasta clearly does.

Based on the advertising Vendasta is doing, along with the volume of traffic to its site, the majority of Vendasta’s traffic is skewing towards it’s Entrepreneur and Agency cohorts. These cohorts are smaller companies, which equates to lower LTVs and higher churn rates.

However, with the exception of the Free plan, the sales process for these cohorts is the same as the Enterprise plan – schedule a 1-on-1 demo. Vendasta could better leverage the time of their sales reps specifically in regards to the Entrepreneur and Agency cohorts by leveraging webinars – either live or evergreen.

By advertising as an “Agency In A Box,” Vendasta is primarily attracting wantrepreneurs and startup agency owners, which (based on its business model) seems like this cohort of customer is not Vendasta’s profit center.

CEO Brendan King has said that Vendasta sees a payback period of approximately 9 months across all cohorts. I see lowering this payback period to their Entrepreneur and Agency cohorts as Vendasta’s greatest area of opportunity.

By leaning into the educational content that these cohorts are already looking for and charging a premium price point ($500 – $5k), Vendasta could easily reduce their CAC payback to 1 month, while simultaneously ensuring their sales reps are only speaking to existing customers who are fully indoctrinated into the Vendasta value proposition.

Here’s how it would work:

Vendasta would create and sell online education workshops around the core competencies it takes to run a profitable agency.

These workshops could be either live or (more likely) evergreen workshops, priced between $499 – $1499. These price points allow profitable cold traffic customer acquisition via Facebook and YouTube advertising at breakeven or better without requiring a 1-on-1 sales conversation. The content in these workshops would need to justify the price point, certainly, but the content in the workshops would also serve to presell the value of the Vendasta platform. At the end of each workshop and embedded throughout is a call to action to speak with a Vendasta sales consultant, along with a student-exclusive, limited time offer.